Update 25/01/23: We are currently making all pieces to order as we are very low on stocked items, please allow approx. 6-8 weeks lead time from ordering to receive the order. For larger items such as the dragon chimney pots and special order items check lead time on listing or contact us regarding availability 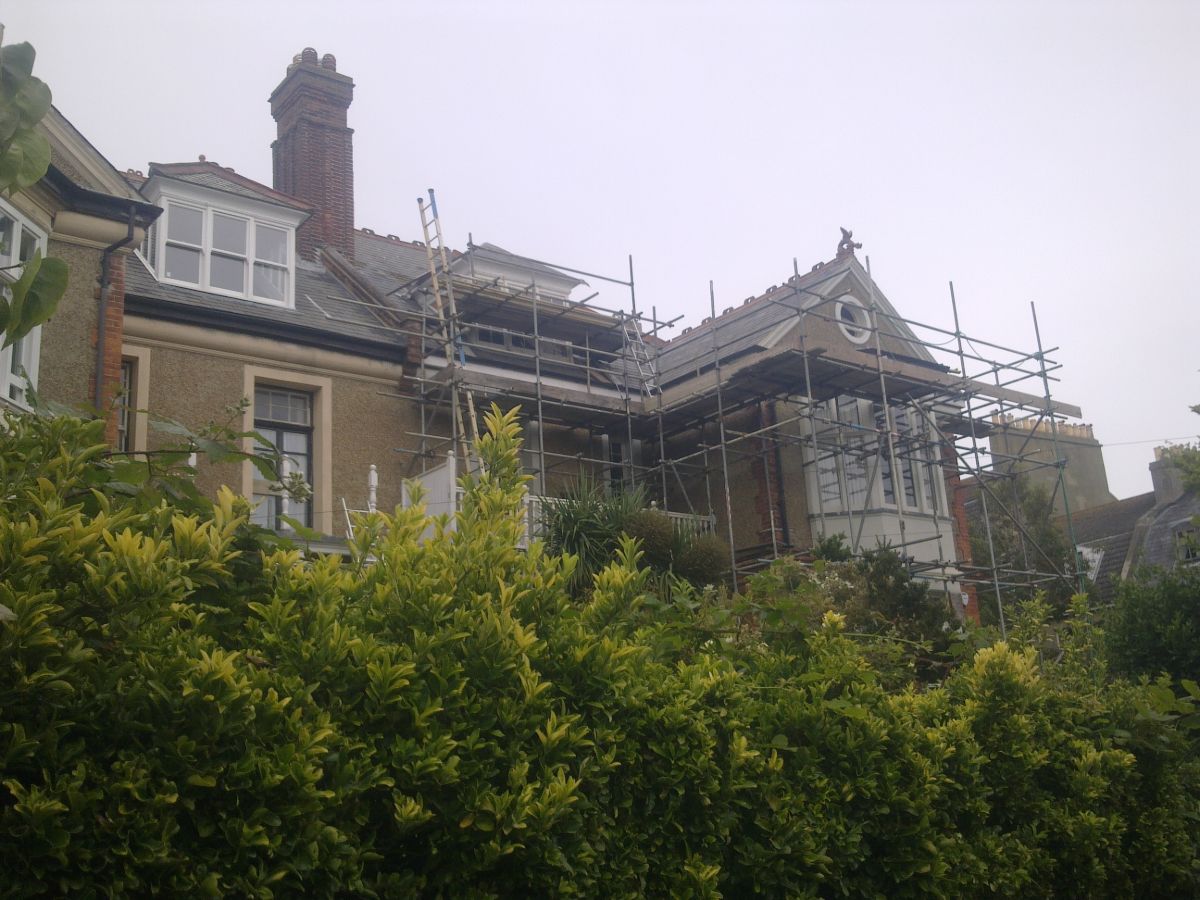 These photos were sent in by a delighted customer showing work in progress on their grand Victorian property. The photos were taken after the ridge dragon had been fitted to show how the building works were coming along and it shows the dragon finial in place on the gable end overlooking the front garden. The scale of the ridge dragon looks perfect for the size of the property as is it a good sized 3 storey property and really looks in keeping with the scale

The Victorian property features a roof which has been roofed with slates and has crested ridge tiles and plain ridge tiles. The crested ridges tiles and plain ridge tiles have been installed adjacent to each other along the ridge tile run to create a decorative feature and the dragon is the focal piece on the gable. The building also hosts other original finials and has a firewall or parapet as they are also called and a large chimney stack with original chimney pots

Although this set of photos show the scaffolding up and work being carried out by the roofers and builder you really get a feel for how good and eye catching the ridge dragon looks. It certainly looks at home there and looks like it could been there for well over a 100 years as it was more commons in the Victorian and Edwardian era for decorative finials such as dragons, gargoyles and grotesques to decorate grand properties which added architectural details to the roof 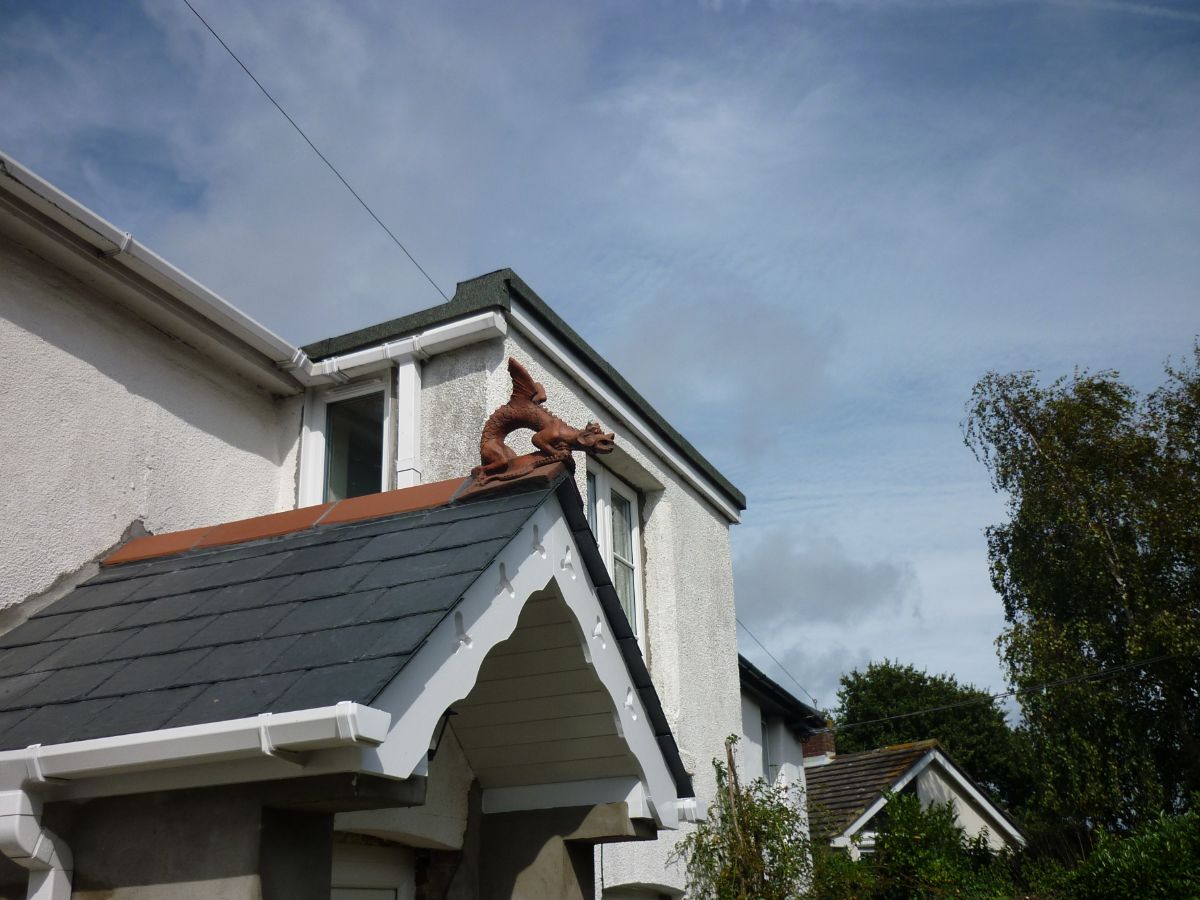 This collection of photos show 2 x ridge dragons installed on the porch and main roof of the house and were sent in by the customer after completing the renovation of their house in Southampton. A smaller scale angled ridge dragon was used for the porch which looks perfectly in scale and proportion and has some excellent detail which can be appreciated from close up. The porch is wooden construction with decorative clover leaf bargeboard and the roof looks like Spanish or Chinese slate with plain terracotta ridge tiles. The dragon is installed so it overlooks from the porch and creates a lovely feature to add decoration

The main house roof features a larger scale emperor roof dragon and again having a larger scale piece for the main roof works well because it create a great silhouette and can be seen better from ground level. The customer had to be a bit more inventive with installing the dragon because technically it is normally installed on a run of ridge or at the apex of a gable end but this one is installed on the hip end in place of a ridge tile. The ridge angle looks like it may have differed slightly from the original ridge that was located there but the roofer has done a fine job with incorporating it into the roof design with mortar and from the ground level the dragon creates nice feature on the hip

The property is approx. 1950’s or 1960’s and has pebbledash rendering, the customer has done a fine job in adding some more original features to enhance the building and was in the process of repainting and improving the rendering 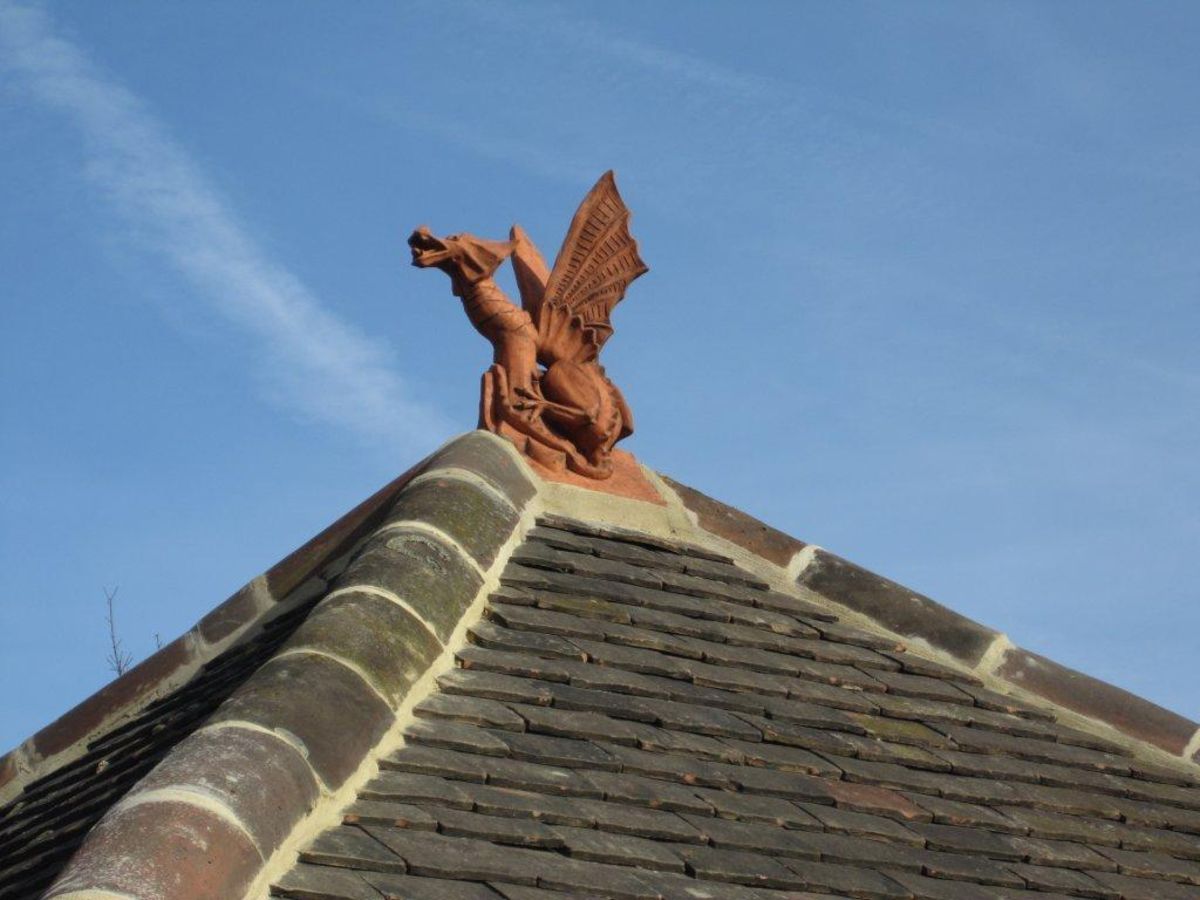 This lovely set of photos taken on a sunny day with blues sky show quite an imposing but beautiful terracotta dragon finial as a feature piece on a bungalow roof. It was installed on a beautiful bungalow in Minster in Kent, the customer was having some roof works done. As part of the works some of the ridge tiles were replaced and repointed with mortar. The roof is four sided also known as double hip, square of pyramid In terms of the shape and they was looking for a lovely feature piece for the apex

The dragon has been used very creatively to create a stunning feature at the apex. The roofer has removed the central ridge at the top of the roof and has installed the dragon in place with mortar bedding and along with the repointing work has incorporated the dragon nicely into the roof. The dragon is currently brighter in colour than the ridge tiles and roof tiles on the roof but will darken as it weathers and ages naturally and will weather to a similar colour to the roof fittings

It shows a very good example of how versatile the dragon finials can be because not only can they be fitted on gable ends and hip ends they can be used in this way to creating a feature at the apex of a four sided roof to add architectural detail and interest to the roof. We have several ridge dragons that come in different sizes and styles that could be used in the same way 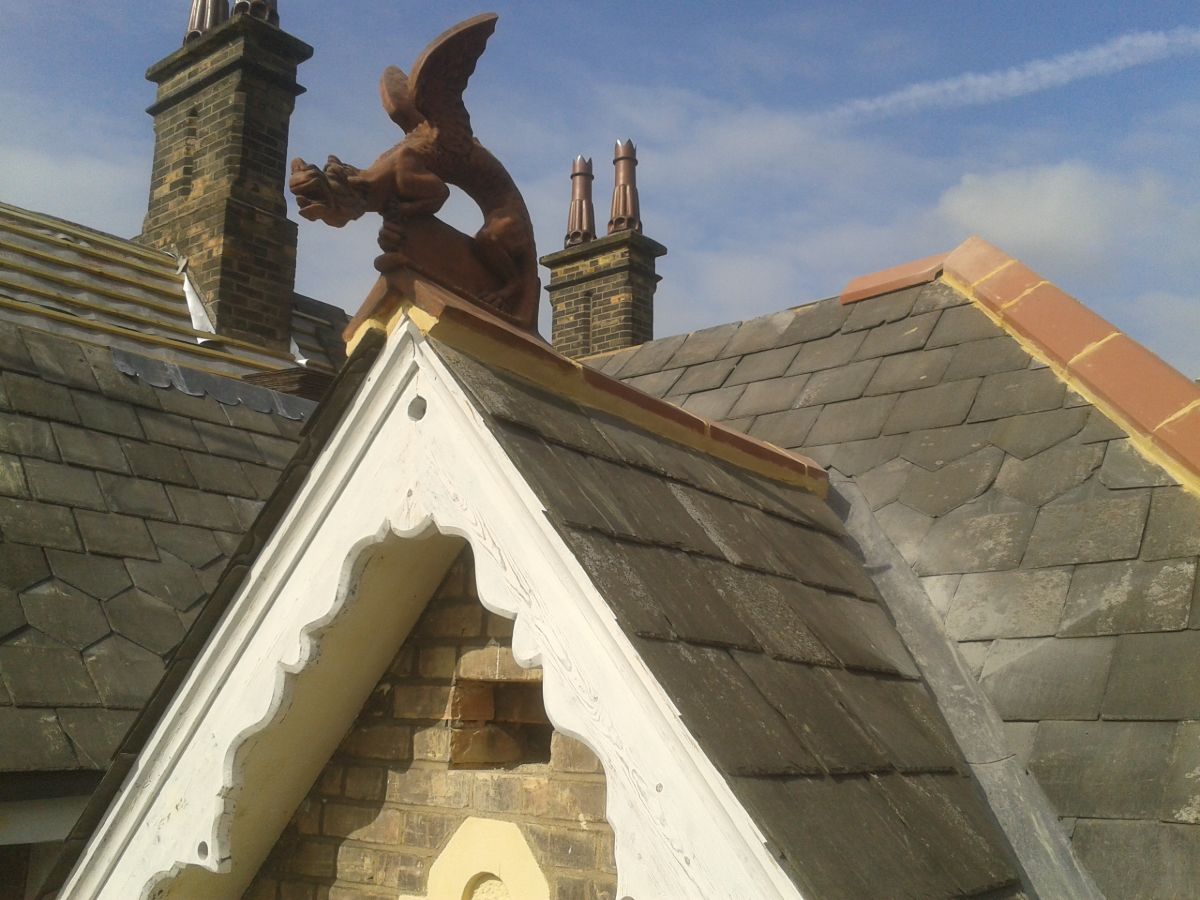 This great set of photos was sent in by a customer that was renovating a property in Hermon Hill, London to bring it back to its former glory and as part of the works was re-roofing the property. The property is a brick built Victorian era building with nice decorative chimney stacks and ornate soffits\fascias. The customer opted to roof with slate and use terracotta ridge tiles for the ridge runs along the ridge line and for the hips. They was looking at restoring some lost roofing detail to the roof and decided to incorporate an original style ridge dragon and a traditional obelisk roof finial

The finished result looks great, the colour of the slate looks natural and traditional as does the ridge tiles and finials which give colour contrast and detail to the roof. Traditional and ornate finials have been used as part of this project, we supply many different types of finials in various sizes and styles to suit just about any kind of project